Shishir is the second, of six hosts, who will be working with companies in Season 3. # 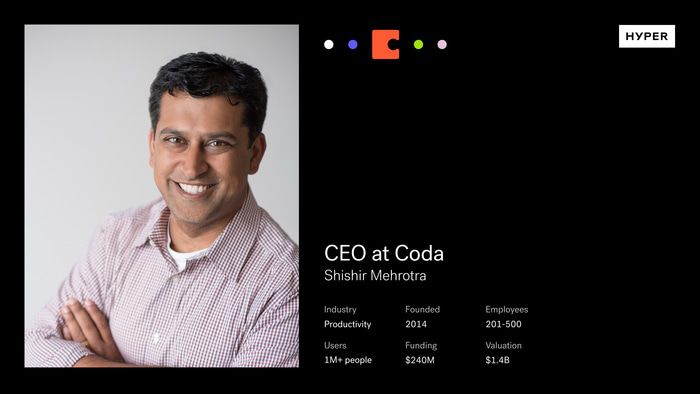 Last week I announced a new experiment we’re working on at Hyper.

Founders who are accepted into Season 3, will get the opportunity to work with founders who’ve recently built businesses that have gone from $0-1B+ in valuation. As part of the announcement, I unveiled our first host, Immad Akhund, the Co-founder and CEO of Mercury.

This week, I’m thrilled to unveil Shishir Mehrotra, as a new host for this upcoming season.

Today, Shishir runs Coda, the $1.4B company he co-founded that is an all-in-one document product—now used by more than 25,000 teams.

The work you’ll do with these founders is nothing so vague as ‘fireside chats’ or mentorship that doesn’t lead anywhere. Instead, you’ll be on Zoom calls with some of the best founders in the world—so you can learn from them and apply tactical learnings to your own startup.

Want the founders of Coda and Mercury to help you with your startup? Apply to Hyper now.

Sam and Liam are two, of six hosts, who will be working with companies in Season 3. # By: Shahed Khan An exciting unveil today: If you’re part of Hyper’s upcoming Season in January, you’ll be working directly with Liam Don and Sam... Continue →