Sam and Liam are two, of six hosts, who will be working with companies in Season 3. # 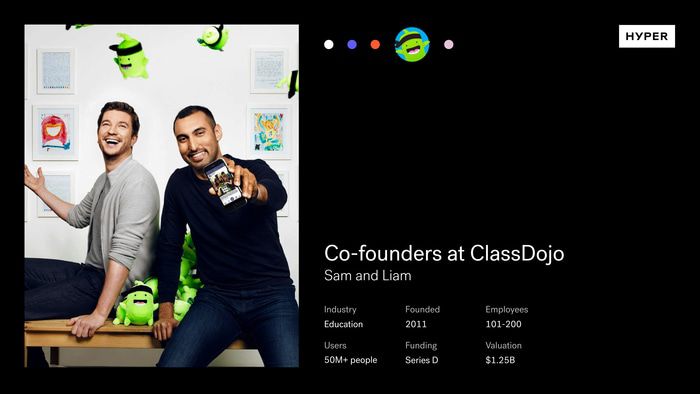 An exciting unveil today: If you’re part of Hyper’s upcoming Season in January, you’ll be working directly with Liam Don and Sam Chaudhary, co-founders of ClassDojo.

Here’s why we’re thrilled to have them on board:

Sam and Liam met in the UK with a common goal: to find a way to help every kid on Earth get an education they love.

Eventually, that shared goal turned into ClassDojo which launched in 2011 as part of the first cohort of Y Combinator’s education incubator, ImagineK12. Since then, they’ve turned it into one of the largest consumer internet companies in the world built to serve kids.

All this to say, I couldn’t be more excited to announce both of them as our upcoming Hosts.

In addition to Liam and Sam, Season 3 of Hyper will pair you with Immad Akbund of Mercury, Shishir Mehrotra of Coda, and one other host (announced next week). They say you’re an average of the five people you spend the most time with. If that’s true, Hyper’s going to help you think more like a unicorn founder.

Applications for Season 3 are open. If you want to spend 4 weeks building your startup with unicorn founders, apply here.

Applications for our Spring program are now open # By Shahed Khan Six months ago, I appeared on a podcast episode where Josh Buckley and Ashley Higgins interviewed me about Loom and how we leveraged Product Hunt — to grow in the company’... Continue →